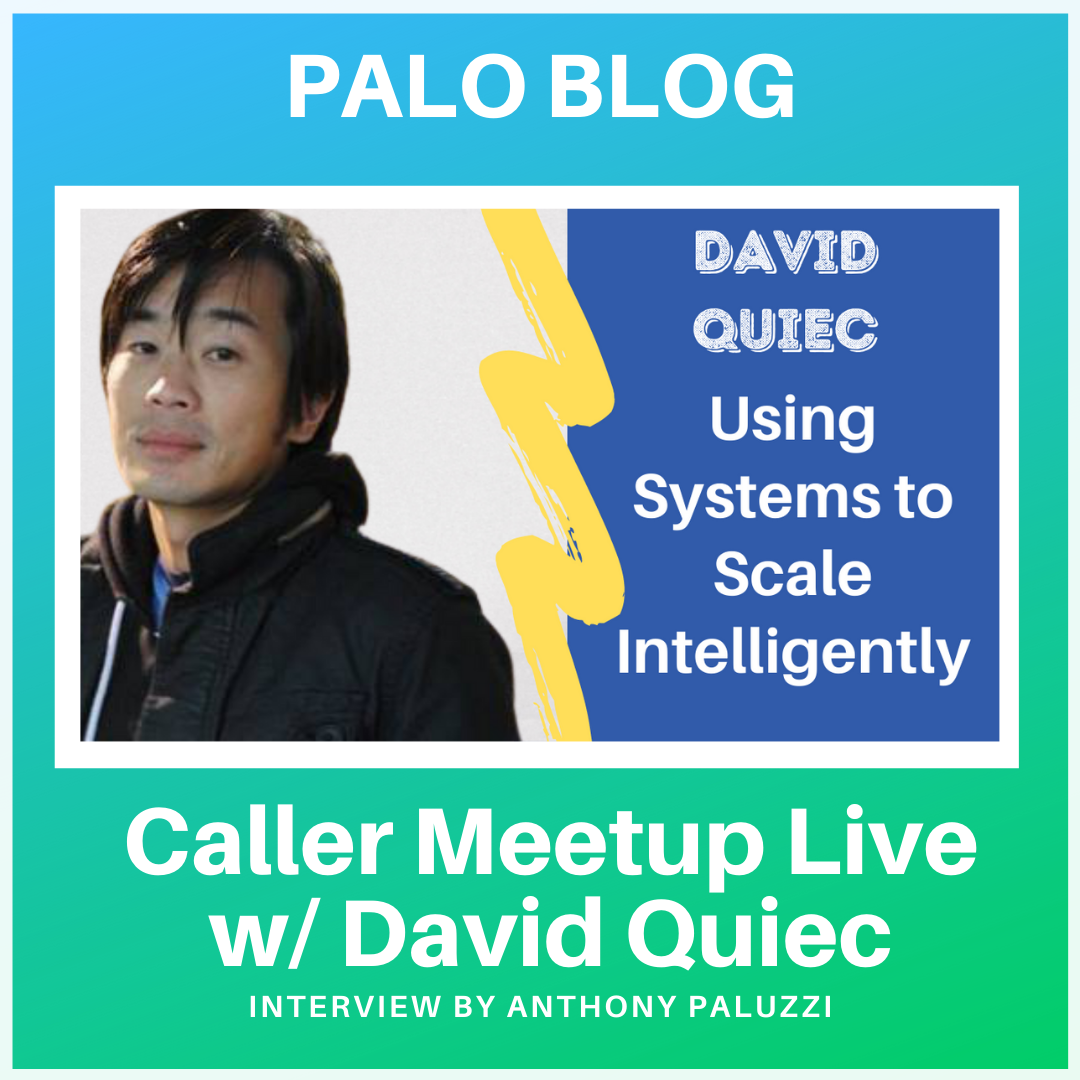 How to Launch Successful Ad Campaigns and Scale Effortlessly [Video]

In my latest Caller Meetup episode, I linked up with David Quiec to discuss how to launch successful Google Ad campaigns and scale effortlessly. David is the founder of Enginefish; a performance-based marketing company focused on delivering calls and leads.  He has played for the US underwater hockey team and has an MBA from UC Berkeley.

Here are the essential takeaways from my interview with him, which you can also watch below.

A Brief Background about David Quiec and How He Started Marketing

David was born and raised in the Philippines, but moved to the United States in 2003. He worked with a few startups in the US before launching his own lead gen agency named Enginefish.  I was curious to know if he had any marketing knowledge/ experience before he moved to the US. He points out that he only had general marketing experience he had acquired selling ice creams in Manila.

Switching from traditional marketing to digital marketing wasn’t easy for him, but he had to do it because he was looking for something meaningful and interesting to do. He wanted to leverage some of the experience and passion he already had to grow and become successful.

The biggest challenge with traditional marketing was that even though there was money to spend, you couldn’t know whether something worked or not. Even if you knew it worked, it was almost impossible to do more of the same thing because the advertising agency handled almost everything.

Moving to performance-based marketing gave him more control over the campaigns he launched. Based on the marketing metrics gathered, it was relatively easy to know if a specific strategy worked or not. If it worked, you could decide to spend more on it and do away with the rest.

Basically, David enjoyed the security in numbers (like most of us do) because it helped him make decisions based on facts. The increased visibility on the attribution side of things is what makes performance-based marketing so interesting and fun.

David is quick to point out that he started Enginefish as a side hustle back in 2007. However, his business partner, Manotte Tan, joined him and started running it full-time in 2015. The biggest challenge he faced while starting the agency was figuring out what they wanted to do.

They had to experiment with many things, which turned out to be a major distraction.  He says that most marketers tend to like things because they don’t know the reality about them. Once they figure out the truth about the things they were interested in, they realize it is not worth the effort.

It takes time to overcome this stage and determine what you want to do.  Sometimes, you need to research more and gather a lot of data to hack it. With the data sets, you can easily analyze different scenarios and identify opportunities to explore.

I asked my good friend how he identifies new opportunities in different verticals and the steps he follows to seize the opportunity and move from the discovery phase to automation for scaling purposes.

He tells me that his company has developed a universal formula that they use when launching campaigns in every vertical, regardless of whether it is a new vertical or not. The formula cuts across, and the beauty of it is that you can start with less risk.

However, for digital marketers without a proper system to take care of campaign launch in new verticals, David says that they need to evaluate their traffic and clients before launching any campaign. He advises against the conventional method of setting up an Ad account, building everything from scratch, and launching.

The risk in this approach is that if things don’t work out, everything is thrown out of the window. According to David, a better way to do it would be to approach it from a different perspective. Think of yourself as someone who is selling a lead to a set of clients that you will plug into your system.

That means you are in control of everything, and you can decide how many calls or leads you are sending to a particular client based on their performance. If you launch a campaign and it doesn’t work with one client, you can always try it out with a different client instead of shutting it down. This makes everything a lot easier.

Furthermore, the data you collect from the different campaigns informs the changes you need to make on your landing pages, funnel, and traffic sources relative to each of your campaigns.

I was also curious to know how David approaches the whole concept of building funnels to ensure his formula is utilized optimally. He tells me that his formula is broken down into three main segments: traffic, funnel, and monetization.

He points out that the way he builds Google search ad campaigns is similar for all of his clients and uses the Single Keyword Ad Group (SKAG) approach. Basically, you find as many keywords as you can, push them into ad groups, specify the match types and launch the campaign.

As soon as the numbers start trickling in, you can determine which keyword is better than the other and focus on it more. The numbers will automatically tell you if your funnel is cleaning up properly and whether you need to make changes to your campaigns.

Since you are sending an equal number of calls/leads to different clients, you can now start figuring out who is converting their calls/leads better from an EPC perspective and the conversion rate for both long duration and short duration calls.

Your primary objective is to try and make every campaign work on your preferred EPC/CPA model.

How Do You Know Which SKAGs to Scale from the Large Pool of Keywords?

When it comes to identifying which SKAGs perform better for scaling, the cost per acquisition model works best.   To optimize your keywords, you need to use a CPA combination for a long term call and a short term call.

Luckily, you can easily derive that number from the average EPC that you are doing across all your buyers manipulated by any durable buyer you expect/are seeing. Technically you are reverse engineering your EPC to determine your CPA and use the figures to filter and scale your SKAGs.

Furthermore, the data you gather around your calls will automatically delineate good keywords from bad keywords.

For instance, a keyword that results in a 10-minute call is better than one that leads to a five-minute call. With such information, it becomes easy to identify which SKAGs to scale and which ones to eliminate from your campaign.

I was curious to know some of the things that David was keen to focus on in 2021. He tells me that the most obvious opportunity he sees is trying out his processes with new channels.

Paid search ads to call have been the primary thing, but it may be the right time to move to other channels such as Facebook, Native Ads, and even YouTube GDAs. You can also try running ads on different search engines such as Bing.

There is much more to Google ad campaigns than just the traffic. There are funnels you need to manage and a lot of other stuff you need to do to convert a click into a call; whether it converts or not.

If you are running Facebook ads, you can use Lead Messenger, which has a funnel.  However, if you send people to messenger, you have to ask yourself the kind of experience they are getting once they land there. Are you going to ask them a question and have them call in, or are they going to fill a form?

You can also do a lead form. Fortunately, we have lead forms for YouTube, Google, and even Facebook.  But you must keep in mind that getting calls from a lead form is becoming difficult because you have to comply with all TCPA guidelines to avoid running into trouble.

Also, if the lead form isn’t working well, it becomes difficult to understand whether it is your form that sucks or the dialer.

Basically, you need to learn how to manage your traffic source and make everything click. The simplest way to launch a campaign is probably to go for the click-to-call option.

Staying on Top of Trends

David is quick to point out that the best way to learn things is through experience. Since he has been doing the digital marketing stuff for a while, much of what he knows has come from experience.

However, staying in contact with your account reps from Google should provide you with first-hand information on upcoming changes and so on. From there, you can insinuate what they want you to do to stay relevant.

You should also consider building simple systems to automate some of your smaller tasks to free up time for research and experimentation.  Sometimes, small things add up and become bigger tasks denying you a chance to stay on top of things.

Get In Touch with David Quiec

You can get in touch with David via hello@enginefish.com.

Choose an option to get started.

You are an expert in generating traffic online and would like to monetize your media with PALO.

You're looking to grow your brand or business by working with PALO to acquire more customers.

You're looking to chat with a member of our team about something else.